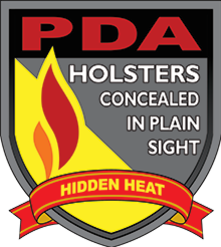 Opening the standard magnetic closure is virtually silent, unlike a zipper or Velcro. Pull on the lower edge of the cover with the fingers of the drawing hand, releasing the magnetic closure and flipping the cover up out of the way. The thumb is used to momentarily retain the flap up. Keeping the fingers straight move directly to the front face. Continuing the motion with the trigger finger extended, grasp the firearm’s butt with the two or three remaining fingers, initiating the draw and pulling the gun from the holster. As the gun starts to come up from the holster, wrap the thumb around the butt securing the grip and completing the draw with the trigger finger extended. (The trigger cannot be engaged until the gun clears the holster)

As the gun is brought up the weak side hand can be employed for a two-hand grip, while the trigger finger remains alongside the trigger guard until the sights are on target and it has been determined to take the shot. With minimal practice the first shot can be away in about the same time as a thumb-break holster, generally on the order of 1.5 seconds or less. The weapon can be re-holstered one-handed.

VEHICLE: Open the flap and drop the holster into the door pocket; let the flap overhang the pocket edge for full concealment. The holster can also be attached to seat belts, safety harnesses, or hand holds.

NIGHT TIME: Slip the cover flap under the mattress for a motel night time holster.